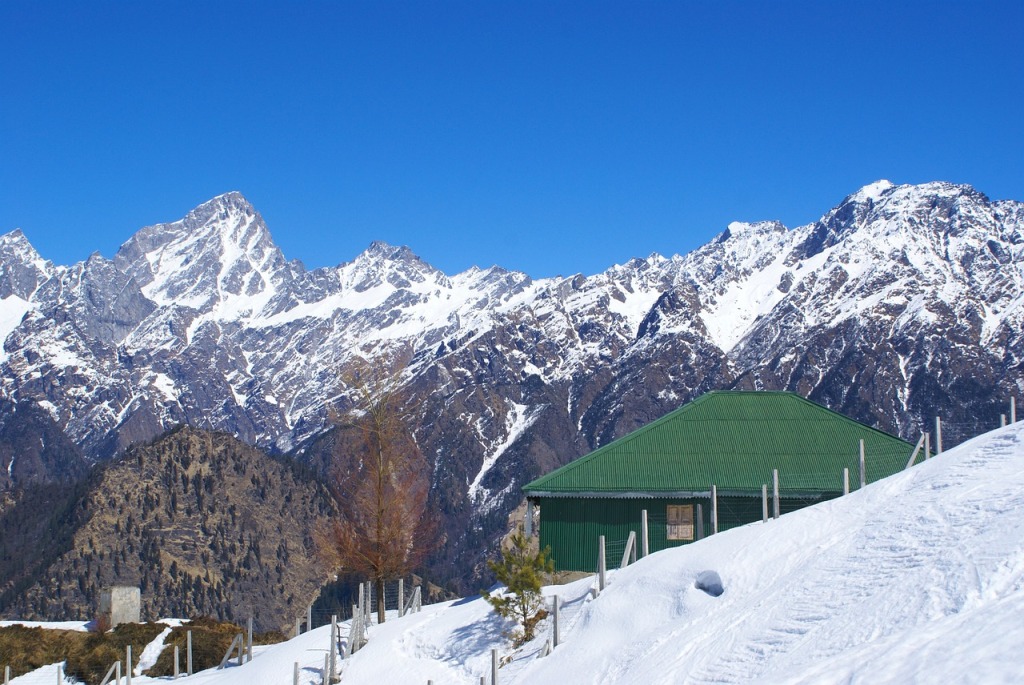 Auli Chopta Tour Package is well managed tour to cover two beautiful destinations in Hill of Uttarakhand. Travelers enjoy in their weekend holiday and lower of snow trek spend their leisure time playing with snow and take a pleasant freshness of surrounding.

After Breakfast, check out from the hotel and Drive to Joshimath , Auli check in to the hotel evening Dinner Overnight Stay at the Hotel Auli.

After Breakfast, visit Auli by Cable Car or Road drive. Auli is famous for its 3 KM long skiing slope. Auli is located at a distance of 16 KM from Joshimath by Road. There are roads connecting Joshimath to Auli but best way to travel to Auli is by cable car. Auli is located at a height of 2750 meter is famous for Ski, many national and international competitions on winter sports like Ski are organized during Jan to March months when Auli gets covered by more than 6 feet of snow and evening dinner overnight stay at the hotel Auli.

After Breakfast, check out from the hotel and drive to Chopta on arrival check in to the Camping Bonfire Snacks Veg and non Veg Light Music Dinner Overnight Stay at the Camp Rishikesh.

After Breakfast, Starting in the wee hours of dark will let us have a beautiful sunrise experience from Tunganath top. The trek runs on a well-defined concrete-bound trail from Chopta to the temple. Today, the hike will be fraught with steep climbing challenges with sharp turns to cross by. There will be other shrines on the way, of which a particular temple with a flagpole is notable. This one comes after the 10th bend of the road and marks the opening of a splendid view of Chandrashila up ahead. From here, you will also get a clear vision of a connecting peak to Chandrashila. This one is named Ravanshila. In the winters, you will find snow from here. The 11th bend marks the entryway to Tunganath above which the splendid Chandrashila peak towers at 12, 083 ft. The route to the peak bends from behind the temple complex. Beware of thick snow on this summit stretch after December till the end of April. Crampons and gaiters are highly recommended for the snow climb and your trek lead is expected to make the path through the cover of snow sludge with the help of an ice axe. At the end of a steep and arduous climb, the summit will be reached with a 360 degree view of the Garhwal and Kumaon mountains welcomingly lying ahead. Notable peaks in this panorama of grandeur are—Nanda Devi, Trishul, Nandaghunti, Dronagiri, Chaukhamba, and Kedar. Glimpses of the Thalaysagar and Gangotri ranges too could be made out at the edges. ack trek to chopta and free foe leisure & visit to sun set point dinner overnight stay at the camp.

After Breakfast, check out from the camp and drive to Haridwar on arrival check in to the hotel evening dinner overnight stay at the hotel.

After breakfast, check out from the Camp and drive to Delhi Airport railway station drop. Useful things to know before you go

How do I plan an optimal trip from Delhi to Chopta?

Here are the best ways to reach Chopta from Delhi: By Bus, By Air, By Train.

Can I go for the Chopta Chandrashila trek without a guide?

Yes, you can go without guide from Chopta road head to Chandrashila top via Tungnath. The trail to Chandrashila goes through the trail adjacent to the temple, however trail is not much visible and you need to be watchfull to be on the right trail. There is also a trek route from Deoriatal to Chandrashila via Chopta, for which I would recommend to take guide.

How good is chopta?

Chopta is an extemely scenic place. With lush green mountains for miles to see and fresh, crisp air, you wouldn’t want to miss out on this place. It’s quite close to places like Auli, which is popularly known as the ‘Switzerland Of India’ and Tungnath, a heavenly abode.

The entire region is extremely popular with tourists so you can expect a fair amount of hustle bustle. It’s also a hotspot for a lot of touristy activities like Zorbing, Skiing, Zip lining, etc. And if you’re feeling a little extra adventurous, there’s also off road driving for the brave hearted and thrill seeking.

What is the Best Time to Visit to Chopta

Chopta is an absolute destination and a hill station which can be visited round the year. If you wish to visit the sacred Tungnath Temple then visit from April to November, otherwise you find the temple closed. Best time to to travel to Chopta is in Summers (April – June) and Winters (Oct – Dec). Travellers interested in snow fall or want to experience snow trekking in Chopta then Jan to March are the best months.

Chopta in Summers: The weather of Chopta remains salubrious and pleasing during summers. The Himalayas are distinctly visible and the cool breeze adds charm to the vacation. Carry light woollens with you. During Summers, the temperature ranges between 10°C and 24°C in Chopta.

Which is better Auli and Chopta?

its totally depend on traveller both destination in uttrakhand and both on hill. in greenry, mountains views , food both are same but chopta have benefit of tungnath (highest shiva temple) and chandrasila 360 view trekking with low budget camping.if u are planing to go between December to march travel must to auli even in auli u can enjoy 04 km cable car and skiing.